Below you will find a variety of news items for the Northampton Survival Center.

Sandra J. (Sniado) Mackey, 72, of Northampton, passed away unexpectedly on Monday December 30th, 2019 at her home. She was born in Northampton on June 23, 1947 to the late Joseph and Carmen (DeMello) Sniado. Sandra was educated in Northampton and graduated from Northampton High School.

Monique Rowland, age 96, of Northampton, Massachusetts, died in the early hours of December 28, 2019 at her home in the Lathrop Community, in the presence of her loving children. She was born in Brest, France on June 8, 1923, the first daughter of Dr. Lucien and Yvonne Leblanc. Monique was brought up in Rabat, Morocco where her father practiced medicine. She met her husband, the late Colonel Henry C. Rowland, Jr. during World War II and was married in Rabat.

Deirdre Scott died as she lived, on her own terms, November 18, 2019 at home, at peace and held closely by friends too many to count. She began life in New Jersey on September 30, 1954. But she called the Pioneer Valley her home for the last 45 years, wrapping her gifts in many corners of Western Massachusetts. 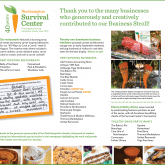 Thank you to Business Stroll Participants!

Three Short PSAs about our work