Volunteering is part of their routine

In the parking lot of the Northampton Survival Center, nine kids dance in the rain.

They can’t help it: They dance everywhere. In English class, while rooted to their chairs, they rap their desks to the hip-hop in their heads. Tap, tap, tap, tap, “5, 6, 7, 8”: In their imaginations, it’s on. All the world’s a stage, and they are the stars of secret shows.

And sometimes not-so-secret shows. On the weekends, if they’re dragged on errands with their parents, they hope it’s to the grocery store. There’s always a pop song in the background, a beat to count on, a tiled aisle that, obviously, makes a much better dance floor.

Today is a rare day off, from school and their work at Ascendance Inner World Arts, a dance studio in Florence. Ranging in ages from 11 to 14, they comprise the invitation-only Meridian Performance Company. They’re here at the Survival Center today because volunteering has become part of their routine.

Three Ascendence staff members gather the girls around an open hatchback. As the kids heft boxes of canned goods and toiletries out of the car, one starts singing softly, “Doo doo doo.” Somehow, they all recognize the tune immediately and improvise a few steps. “Diamonds are a girl’s best friend!” they sing in unison and dissolve into giggles.

Okay, time to focus. It’s drizzling now, and the boxes are so heavy that some of the girls have to lean back to counter the weight. They’re holding a lot, these kids. They have dared to love something for more than half their lives, through a pandemic that, at the age of 9 or 10, probably felt like forever. Many found virtual dancing so frustrating that they considered quitting, but have doubled down now that they are back in-person. As part of Meridian, they study technique, rehearse, and act as teachers’ assistants to the youngest students, their “littles,” every week. They are pillars of their dance community. Now they’re taking their places in the world beyond it.

Ascendance founder Laurel Boyd calls the kids “old souls,” and they are in good company. As a teenager, dancing became Boyd’s refuge. “The studio was the only place I felt like I was truly alive, and could be myself,” she says. She put herself through school and built a space where dancers could connect rather than compete, where they could face the world together. 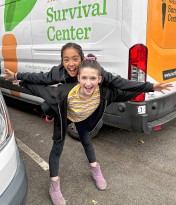 Boyd’s programming coordinator, Kathryn Carpenter, is a former competitive dancer. “Precision, precision, precision,” she was taught, until a joyful adult jazz class at Ascendance, when dancing became more human. She, in turn, has introduced volunteering to the girls because being human is its own balancing act. To dance in Meridian is to reach the highest levels of Ascendence, but the human experience is never a fixed point; there is joy and there is sorrow, there is dark and there is light.

You can see it, the way the kids’ spirits shine together but still make space for each other. At rehearsal a few days after their tour of the Survival Center, the girls practice Mayu Nakamura’s “special part” of a new dance sequence. Everyone stops and turns toward her as she plants her feet, leans on her right forearm, and arches her body as she reaches her left arm high and gazes at the ceiling. She’s like a bridge, suspended, her waist-length black braids gathering on the ground. It’s beautiful and kind of badass, this shape they all take, this whole sequence that they run again and again, before they stop and consider, breathlessly, one at a time, how to make it better together.

At 8 p.m. the girls grab colorful pillows and form a circle on the floor with Boyd, Carpenter, and their third ‘studio mom’, Jamie Bachand. Some of the kids huddle under blankets. It’s been a long day, but they are as energetic as ever, delighting in sharing how they are always dancing, no matter who sees. “My mom said that they could never hold me back from dance,” says Deryn Potter-Hewes, “because before I was even born they called me ‘Little Baby Bump n’ Thump.’”

Carpenter’s daughter Grace grins and shares, “There’s this video when I was like 5 and my mom said, ‘Do a number.’ So I just said random numbers. I was like, ‘48’!”

The kids are beside themselves. I’d rather not bring them back to where we started, to food insecurity and other weighty topics, but they’ve been volunteering for two months now, and it has left an impression. They have learned, for instance, that struggle is not foreign to Northampton.

They know that the Survival Center’s clientele increased tenfold at the beginning of the pandemic. Manna, a community center where the girls prepped and distributed lunch, serves 1,500 people per week. Visiting volunteers from Safe Passage shared that some conditions of the pandemic, such as imposed lockdowns, further isolated survivors of domestic violence. The nonprofit urged the kids to share that help was available, that it was available here.

“I kind of knew about the Hot Chocolate Run,” says Kiran Dube, referring to Safe Passage’s annual event to raise awareness. “But to hear what it’s actually about and to have conversations about it, it’s really different than just like, ‘Oh it’s some charity fundraiser.’”

The girls will run open-eyed next weekend. Since September, Ascendance has collected items for all the nonprofits, as well as the Jack Dunphy Toy Drive. Their “littles” have contributed, too. “You see them looking through the toys and picking one up like, ‘Oh, I want this,’ believing it’s for them,” says Alina Ostrowski. She smiles shyly. “But then somebody explains that it’s for the people who need it. The next week, you watch the ‘littles’ put stuff in.”

By MELISSA KAREN SANCES
For the Gazette